Watching the sunrise over Inspiration Point in Bryce Canyon was one of the most beautiful moments I experienced on this trip. I want to first start off by saying though that it was unbearably COLD! The coldest temperatures I’ve ever experienced in my life. Since we started before sunrise, the temperature outside was already at 0 °F. What I didn’t factor in was the wind chill which made it -18 °F below! I was DYING. The wind was blowing so much that I could barely keep my eyes open and when I did, I literally could feel the water in my eyes start to freeze. Even with the horrible wind and freezing temperatures, I am so happy we did it. I’m sure at the time, I wanted to get out of there as soon as possible. After going through my pictures for this blog post, I consider myself lucky to have gone the day we did.

HOW TO GET THERE

We arrived at Bryce Canyon the previous night and stayed at The Lodge at Bryce Canyon. We just finished Angels Landing at Zion National Park that day and drove 1.5 hours to Bryce that evening. Needless to say, we were exhausted. We were planning to catch the sunrise the next morning so we wanted to stay as close as possible to the park. From the lodge, the drive to get to Inspiration Point was only five minutes. There were probably only one or two other cars in the parking lot once we got there. If you’re staying just outside the park in Bryce Canyon City, I would give yourself an extra 10 minutes. There shouldn’t be any traffic on the way in if you’re trying to make it to Inspiration Point for sunrise. Most likely, you won’t even see a guard at the gate checking your pass at that time.

If you are going to do Inspiration Point during sunrise, especially in winter, there are a few main things you should know so you don’t waste time. There are three main points: Lower, Middle, and Upper. From the parking lot, you will eventually pass all three and you can decide which one you like the best. We decided to head straight for Upper Inspiration Point so we could have the highest vantage point. Just a quick note, getting to the upper lookout is a short hike, but it is straight up. I had to take a break in the middle just to catch my breath.

Sometimes I really wonder how I have the energy to wake up in the morning just to go take pictures in the freezing cold. I knew I wanted to get to Inspiration Point before sunrise, but more importantly, I wanted to get there before dawn. Below is a timeline of our exact schedule that morning.

6:05 a.m. : Got to the parking lot. Spent about 10 minutes getting our equipment ready inside the car of course.

6:20 a.m. : Hiked up to Upper Inspiration Point. Started setting up my tripod. There were three other people already there also setting up their tripods.

8:11 a.m. : Last picture at Inspiration Point. Packed up equipment and started walking back down to the parking lot.

If you read my guide on Hiking Angels Landing in Winter, you would know that I didn’t dress as well as I thought I did. Well, for this little adventure, I was even more unprepared. If I could have worn a spacesuit, I would have. All I could think about is that I should have brought all my snowboarding gear with me. Not just the jacket and pants. I mean literally everything. The boots, the googles, the helmet, and the gloves. I would have looked crazy, but I would have been so solid. Instead, I was jumping around like a fool just trying to feel my fingers and toes. I had the same outfit on I did for Angels Landing plus a few extra layers and it still was not sufficient. Below is what I wore versus what I wish I wore just to give you reference.

These are just some extra things that we brought along with us that might help you as well.

This was a big dilemma for me during the whole planning process. I couldn’t decide if I wanted to go to Bryce Point or Inspiration Point for sunrise. We had one good morning that we were willing to wake up early for so I wanted to make the right decision. I scoured the internet trying to find blog posts and reviews on which outlook point was better. Surprisingly, I couldn’t really find anything so I wanted to address it here in case any of you have the same question.

At first, I had us going to Bryce Point. It’s located at a higher elevation so I thought it would yield better pictures. After doing more research, I decided to switch to Inspiration Point. There seemed to be more pictures and reviews about Inspiration Point and I was also hoping that the location would hold true to its name. In the end, I’m glad I chose Inspiration Point over Bryce Point. I can’t accurately say that Bryce Point wouldn’t have been as good since we didn’t get to go at sunrise. But from what I experienced at both locations, I think Inspiration Point was the way to go.

We visited Bryce Point right after Inspiration Point. We got to the parking lot around 8:40 a.m. The sun was higher in the sky now so the light was much stronger and brighter. From the parking lot, you’ll take a small trail up and then down to the lookout point. The overlook is at the end of a ridge so you’ll feel like you’re in the canyon. Since this point juts out farther than Inspiration Point, the ridge that you’re on casts a shadow down below. The shadow might be there during the whole sunrise since the sun is rising up behind the ridge. Also, since Bryce Point is at a higher elevation, it’s probably not helping with the shadows either. I would say if you want a more straight on view of the hoodoos, go to Bryce Point. If you prefer a side view, go to Inspiration Point.

Inspiration Point is about 200 feet lower in elevation than Bryce Point. I actually like this because I feel like I’m closer to the hoodoos. We started out on the ledge around 6:20 a.m. and the sun was still well below the skyline. The skies were clear and there weren’t any cloud obstructions. As an added bonus, the full moon was still out from the night before. Exactly opposite of where the sun was rising, the moon was slowly setting down towards the horizon. It was even prettier than when we saw it the night before. The sky behind the moon had this amazing pink and purple gradient hue. I honestly think I was more impressed by that than anything else. If I wasn’t freezing my butt off, I would have pivoted my camera set-up and taken a timelapse of the moon setting rather than the sunrise. If you can, I would highly suggest trying to plan your visit during a full moon. Bryce Canyon offers a full moon hike in the evenings through a same-day lottery. We actually were one of the few that won the lottery, but unfortunately that night, clouds rolled in and we saw no sign of a full moon.

Overall, I think you’re going to get a great view of the hoodoos regardless if you go to Bryce Point or Inspiration Point for sunrise. I personally liked Inspiration Point better, but maybe next time I’ll try Bryce Point. No matter what, if you want an evenly lit picture of the hoodoos, you’re just going to have to wake up super early. I think my best pictures were before the sun came over the horizon. Hopefully, this guide helped you out a little and if you have any questions, leave them in the comments below! 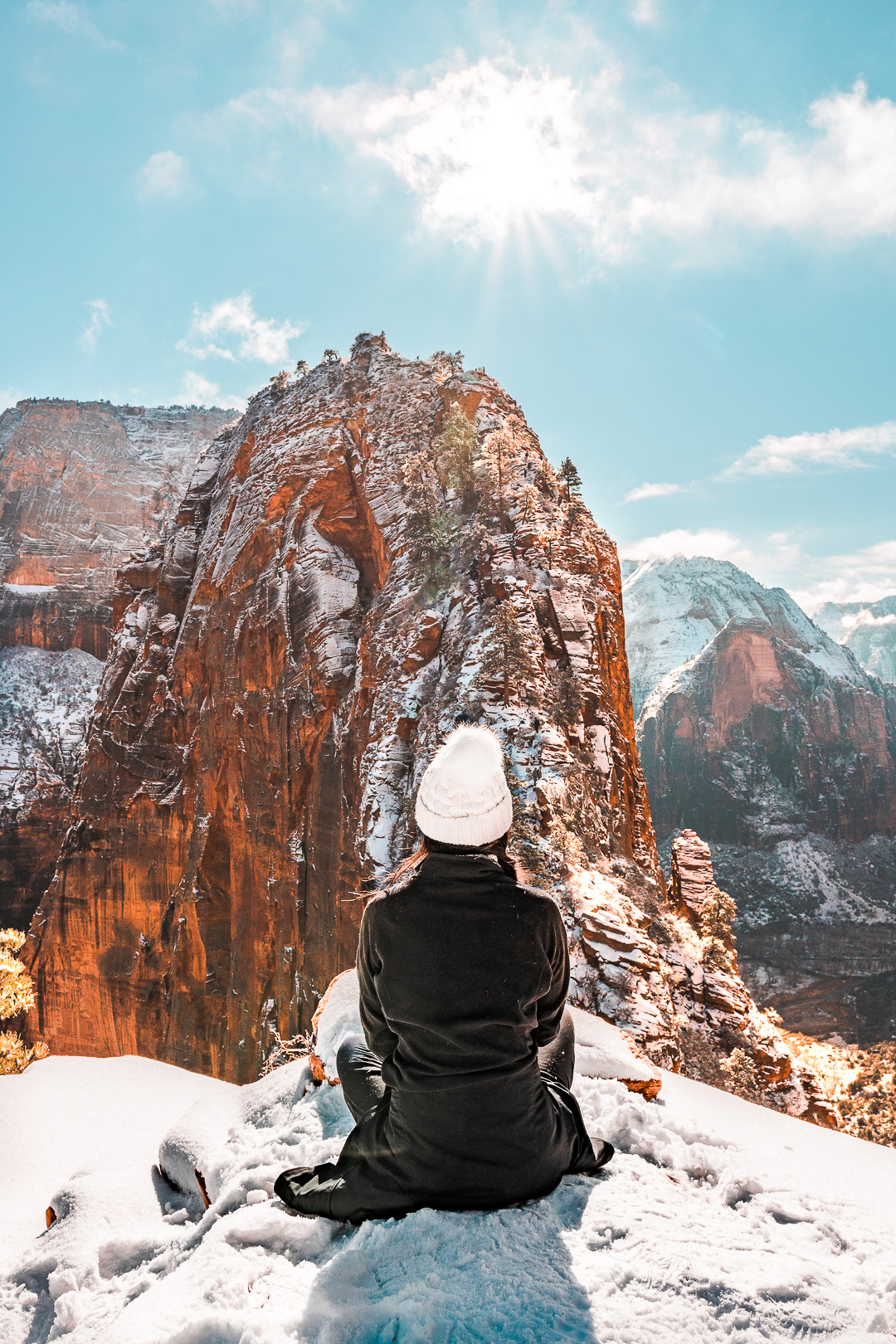 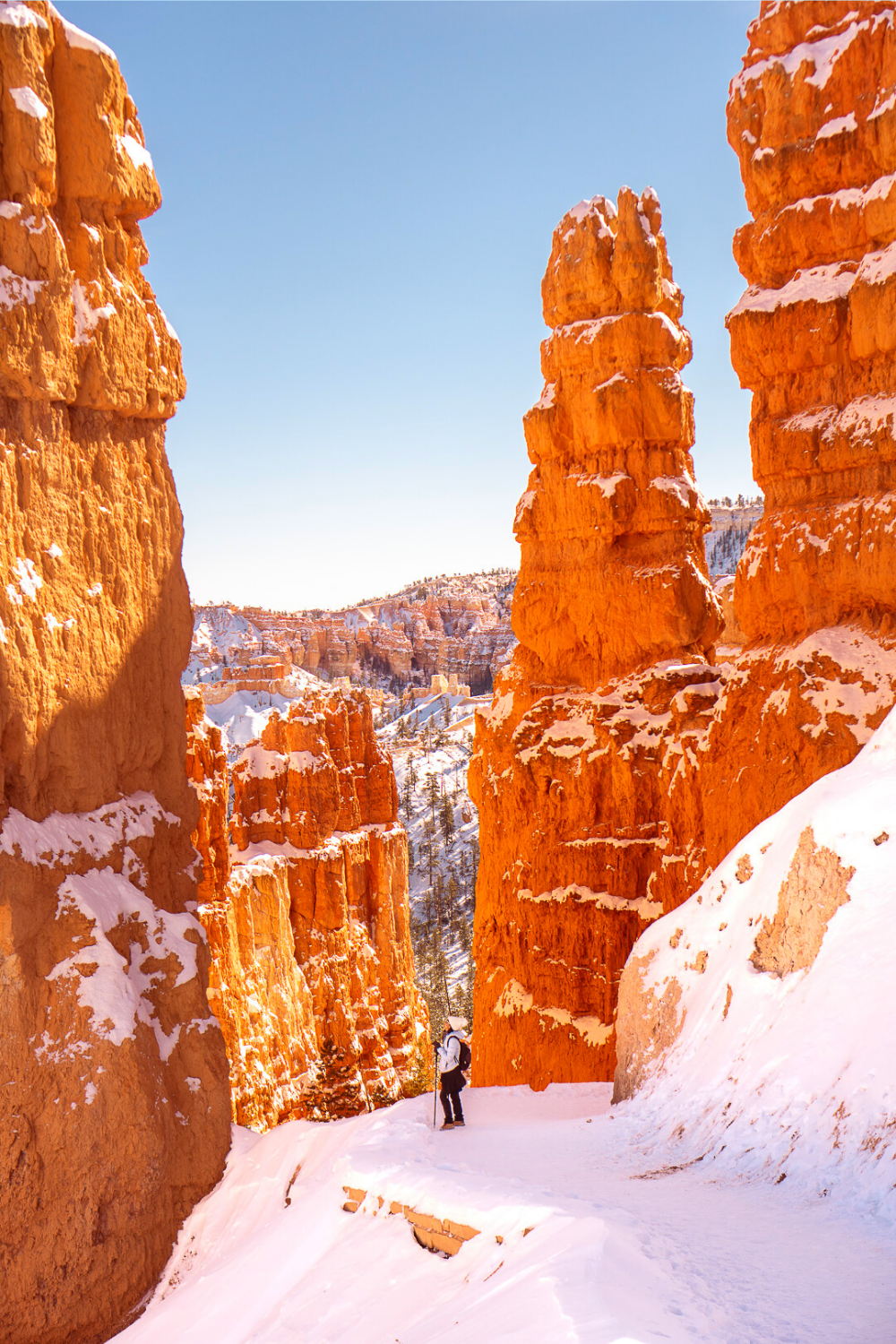 I mean... who wouldn’t love just standing in the

Don’t mind me... just twirling around in the sno

People always talk about the sunset, but have you