When the myVEGAS app first came out, I believe it was just a Facebook game, and then came the mobile slot machine version. They advertised that you could get comped Las Vegas hotel rooms just by playing this game. I literally thought there was no way this could be true, especially on a free app. The only way I’ve ever heard of getting free rooms in Vegas was by spending a lot of money on gambling. In the end, I was intrigued enough to give it a shot and to my surprise, it really does work! Not only are there free hotel rooms on the myVEGAS app, but there are a bunch of other rewards that you can cash in on like spa discounts and free food. I must warn you that this is not something that will be fast and easy, but if you are patient enough, you can end up saving a lot of money on your next Las Vegas trip.

What is the myVEGAS App?

The myVEGAS app is partners with the MGM/Mlife group so most of their rewards have to do with MGM properties like the Bellagio, Aria, MGM Grand, etc. It is comprised of different types of mobile and Facebook games that primarily involve some sort of gambling like slot machines or blackjack. These games are completely FREE and do not require you to spend any money. You can also connect all the games under one account so all your points end up in one place.

I am by no means an expert in this game, but hopefully, I can help get you started. Please note that this is not your typical online gambling game where you would gamble real money. Instead, there are two types of currency that you should keep in mind: chips and loyalty points. Chips are what you play with and loyalty points are what you earn and spend to get rewards. Every time you gamble with your chips, you earn a certain amount of loyalty points. It’s kind of like the equivalent of earning credits at a casino. You can collect free myVEGAS chips by the methods listed later on below or by paying money upfront for them.

The games I usually play are Thunder Cash on the mobile app and Luxor Link on the Facebook App. I haven’t played all the games, but these are the ones I usually go to just because they don’t require a lot of interaction. You just leave the game on and let it roll. I usually set everything to the minimum bet amount so I can roll as long as possible without running out of chips. This is definitely the slow method. If you want to earn loyalty points faster, you will have to bet higher which means you will most likely have to buy chips if you run out. But be aware that there’s a daily max on how many loyalty points you can earn on the mobile apps. It can vary depending on what game you play but can cap off as low as 2,000 loyalty points per day. I’ve never seen the Facebook app cap out on what you can earn though.

My Strategy for Playing the MyVegas App

I am not one to ever spend money on these types of games. I’ve been playing this game for at least five years now and still have never spent a single cent on it. Now, I can definitely see why people might spend money on the game though. If you want to get more chips so you can get more loyalty points to redeem rewards faster, it might make sense to spend $5 or $10 on it. Otherwise, if you are in no time crunch, I’ve always taken the slow and steady approach to this game.

What I’ve been doing lately is just plugging in a super old iPad and having the myVEGAS mobile app run on auto spin the whole day with the minimum bet. I’m telling you right now that this will get you nowhere fast, but at least it’s something that’s running in the background without you ever engaging with it. Sometimes you have to check on it because you have to collect bonuses you earn, but for the most part, I just leave it on all day and all night.

If I want to earn loyalty points faster, then I will play the Facebook version on the desktop. The Facebook desktop version gives you loyalty points much faster than the mobile app but it is harder to get free chips on there. I also run this game on a different browser on my computer while I do my work. Make sure you don’t minimize the window because it’ll stop playing the game. I usually just move the window off-screen so I don’t see it. So, during the day, I could be running both mobile and Facebook apps passively at once.

How to Get Free MyVegas Chips

What Types of Rewards Can You Redeem on the myVEGAS app?

There are rewards like free food, discounts on shows, cruises, and FreePlay which is money you can use to play at real casinos. But the main reason I play the myVEGAS app is because of the free rooms. I should also mention that the free rooms almost always are on Sunday-Thursday only. During COVID, they opened up the whole calendar (including weekends) which was a fantastic deal if you could get one, but that is now long gone.

A good thing to note is that the rewards do replenish every day. So, if you see one that’s sold out, make sure you check the next day or the day after that. The only ones that I’ve seen sold out completely and don’t really return are the two-night comps. Also, the rewards have expanded to include other hotels like the Intercontinental and Crowne Plaza. There aren’t any free rooms for those hotels but they do offer discounted nights and it’s an opportunity to stay somewhere beside Las Vegas. Overall, the reward selection is pretty diverse and you can definitely save money by using them.

One big thing to note is that there are two types of myVEGAS rewards: regular and premium. You can tell it’s a myVEGAS premium reward either by hovering over the reward or by clicking the reward. It will tell you in the fine print if it’s a premium reward or not. The thing with myVEGAS premium rewards is that you are only allowed to use three rewards within a 30-day period. There isn’t a clear answer on when the 30 days begin though. For the hotel stays, some say it begins the day you redeem (book online) and some say it’s the day you actually check-in. I haven’t had a chance to test this out myself, but if I ever do, I will update this post. In regards to the regular rewards, I’ve read that you can buy and use as many as you want.

You Can Return Your myVEGAS Rewards

A good thing about myVEGAS is that if you redeem your loyalty points for rewards and end up not needing them, you can always return them and get your loyalty points back. The requirement is that it has to be within 90 days of when you purchased it or before the expiration date, whichever comes first. This is a good strategy if you just want to check the hotel’s reward calendar to see what dates are available or if you just want to hold on to a reward in case you’ll use it one day. But be aware that once you’ve fully redeemed your reward (i.e. making a room reservation for a certain date), you will not be able to get those loyalty points back. Otherwise, as long as it just sits in your wallet on the app, you have the option of using it any time before the expiration date.

Please be aware though if you are buying your rewards off the mobile app, there is a limit of 5 awards that you can return in a 30 day period. If you are buying awards just to check out dates, I recommend you buying them off the Facebook app and returning them back there. I’ve returned 10 of them in one day before with no problem.

If you don’t want to spend any money on the game like me, then you’ll only be able to unlock 1-night hotel comps. If you are looking to unlock 2-night hotel comps, you will have to spend some money. There’s a good Reddit post that explains in detail how much you need to spend to unlock all the rewards, but essentially it’s $50 to unlock a 2-night comp reward at any MGM hotel except Bellagio and Aria. Otherwise, for those two hotels, you will need to spend $150. With that being said, I have seen 2-night reward comps before, but those are usually during Christmas time or times when Vegas is at its slowest. With COVID slowing down and Vegas opening back up again, I highly doubt I’ll see a lot of these 2-night rewards anymore.

When Does the myVEGAS Hotel Calendars Update?

I’ve noticed that the myVEGAS calendars for the comp hotel rooms seem to update a couple of weeks before the end of the current travel period. For example, the last set of calendars only showed comp dates up to 5/31/2021. I noticed that the game released their new calendars for June-September around the first week of May. So, if you’re trying to plan your vacation around a certain date that hasn’t been released yet, I would just check a couple of weeks before the last date of the previous cycle.

How Long Does it Take to Get Free Rooms?

If you don’t want to spend money and unlock the 2-night reward benefits, then what you want to do is to find a friend or a significant other to also play the game. The hotel allows you to link reservations together so you can stay longer and don’t have to move rooms. Both parties need to be there at the time of check-in though.

What About the Resort Fees?

Ahhhhhh yes, those pesky resort fees. Unfortunately, this is how the app gets you. Even though you don’t pay a single cent for the room, you will still have to pay the resort fee plus tax. A room at the MGM Grand has a resort fee of $39 and a resort fee tax of $5.22. So you will still have to pay $44.22 per night for the room. In the end, you will have to make the decision if it’s even worth spending your loyalty points on a free night especially at places like the MGM Grand, Park MGM, or Mandalay Bay. For a little bit more money, you can book a hotel under the Chase Luxury Hotel and Resort Collection and get free benefits like $100 F&B credit, an upgraded room, and late check-out.

What Rewards Have I Redeemed For?

This is what I’ve redeemed so far. I’ll be updating this list as I go along! 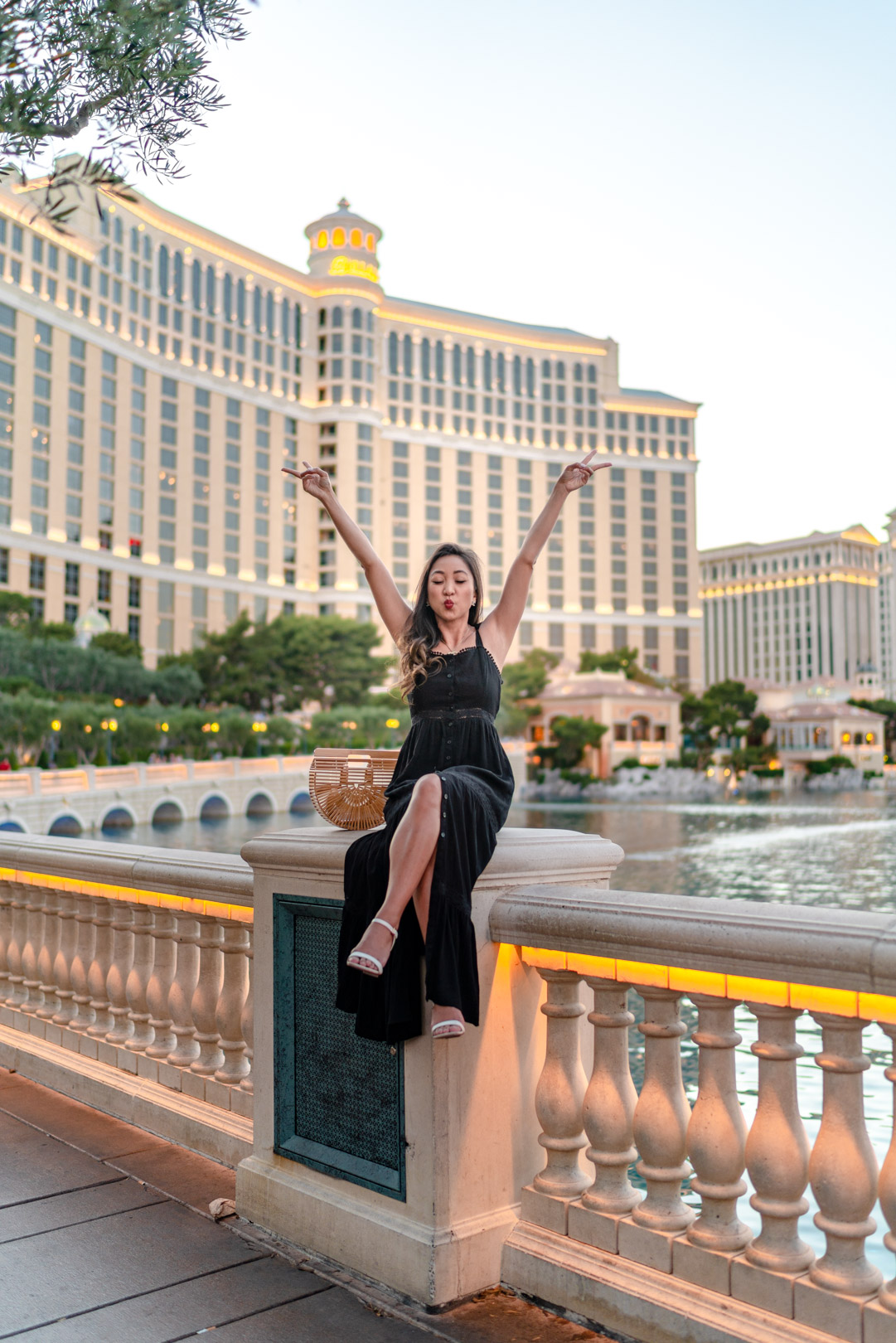